Innovation taken into our own hands – Eckerle presses with 130,000 highly accurate newtons

In order to survive in today’s competitive environment, companies have to respond to customer requirements in an increasingly dynamic and flexible manner. This also increases the demands on their machinery. Eckerle Industrie GmbH also had to react flexibly to an order from the automotive industry. The requirements were high: A press for punched and bent parts that sets new standards in terms of cycle time and continuous part quality. And the whole thing should be as low-maintenance as possible, as well as significantly more compact and less expensive than all other presses on the market.

Within a very short time, an electromechanical servo press with a press force of 130 kN was designed and built at the Baden production site in Ottersweier.

At the heart of the press are two heavy-duty ballscrews, each directly driven by a torque motor.

But why an electromechanical drive and then a direct drive, which is quite unconventional? In contrast to purely mechanical drives, it is attractive thanks to option of adjusting the pressing force and pressing speed to fit to the requirements of the machining process. Mr Deutsch (Automation Team Leader): “During the actual punching process, torque is controlled during pressing. This is how we reduce the cutting impact to a minimum. The result is perfect, lasting part quality and minimal tool wear. We run the rest of the cycle, meaning bending, closing and opening, at the maximum permissible speed for the respective step, thus achieving significantly higher cycle times than with a conventional press. With the integrated force measurement, we also monitor the wear of the punching tool and can therefore plan tool maintenance”.

The hollow shaft rotors of the torque motors sit directly on the nuts to save space and drive the heavy-duty spindles. The bearings are heavy-duty crossed roller bearings. The result is an extremely compact, virtually maintenance-free drive train for the new servo press.

Since the drive is designed with two synchronised servo spindles, off-centre forces during the pressing process no longer pose a problem. In conjunction with the in-house control system, the new drive concept can be used to implement any conceivable travel profile, thus achieving maximum quality and throughput – a new benchmark in press technology.

The advantages at a glance:

Around the world, around the clock

Ten locations in five countries on three continents: With more than 3,000 employees worldwide, the Eckerle Group operates in the automotive, plastics technology and power tool industries.

The new, sophisticated servo press is part of the business field of Eckerle Industrie GmbH. In the factory halls in Ottersweier, the manufacturing service provider produces injection moulded hybrids for the automotive sector – these are stamped and bent parts that are then directly overmoulded with plastic. These parts are used, for example, in brush holders and connectors for all small electric motors, which are now widely used in every car.

However, Eckerle Industrie GmbH is not only a manufacturer, but also a developer and assembler of brush systems, assemblies and EC modules for almost all well-known engine manufacturers in the automotive sector. Other core competences are the integration of electronic components, laser and resistance spot welding and CNC machining. In the field of automation, Eckerle Industrie GmbH is involved in the development and manufacture of manual assembly equipment and highly automated production lines.

The complete package from HIWIN won them over

There was only one press supplier on the market who could provide something comparable. However, the costs were simply too high. That’s why the manufacturing service provider quickly decided to design the machine on their own. “With manufacturers of such machines, everything always has to be purchased, for instance the control system and the machine frame. In our case, however, this was not necessary, since we already have a control system in our fully automated production lines, so we can of course also control the press”, reported Mr Deutsch, Automation Team Leader at Eckerle Industrie GmbH.

As part of the process of selecting the right products, Eckerle discussed the planned design with the responsible customer consultant at HIWIN to see which motor/spindle combination could apply which forces and how the loads would be transferred to the machine frame via the crossed roller bearings.

Mr Deutsch saw it as a great advantage that all scenarios could be calculated without having to worry about the component conditions of other manufacturers. “HIWIN was the perfect choice! There are few providers on the market where you can get everything from a single source and, above all, with comprehensive consultation”.

Hand in hand to an efficient solution

The Eckerle Group developed the servo press in its own design office. Although it was originally intended for integration into an internal production line, Eckerle Industrie GmbH is going one step further and now also offering a new press generation together with the complete production line to external customers. By doing so, Eckerle Group is expanding its range of products. Everything comes from a single source: From design and engineering to production, manufacturing and assembly. Together with HIWIN GmbH, a specialist for drive technology, a regional and personal contact was created in the field of mechanical engineering. 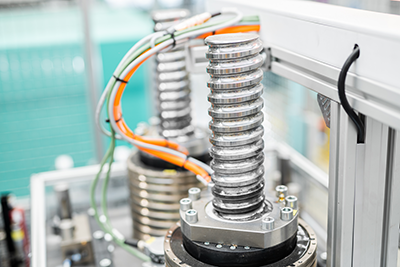 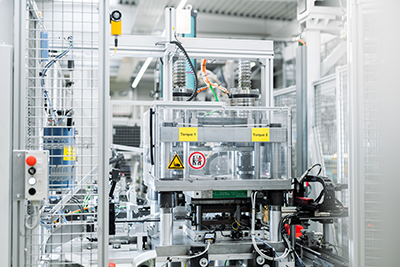 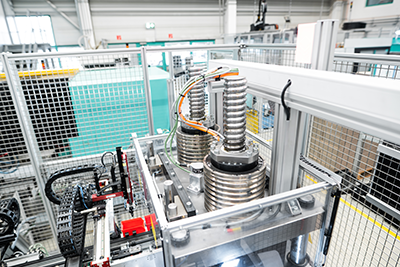